Changing Your Stadium Graphics for Multiple Sports, Teams, or Events

The Look Company provides solutions for large stadiums to changeover their stadium branding for events, competitions or teams. 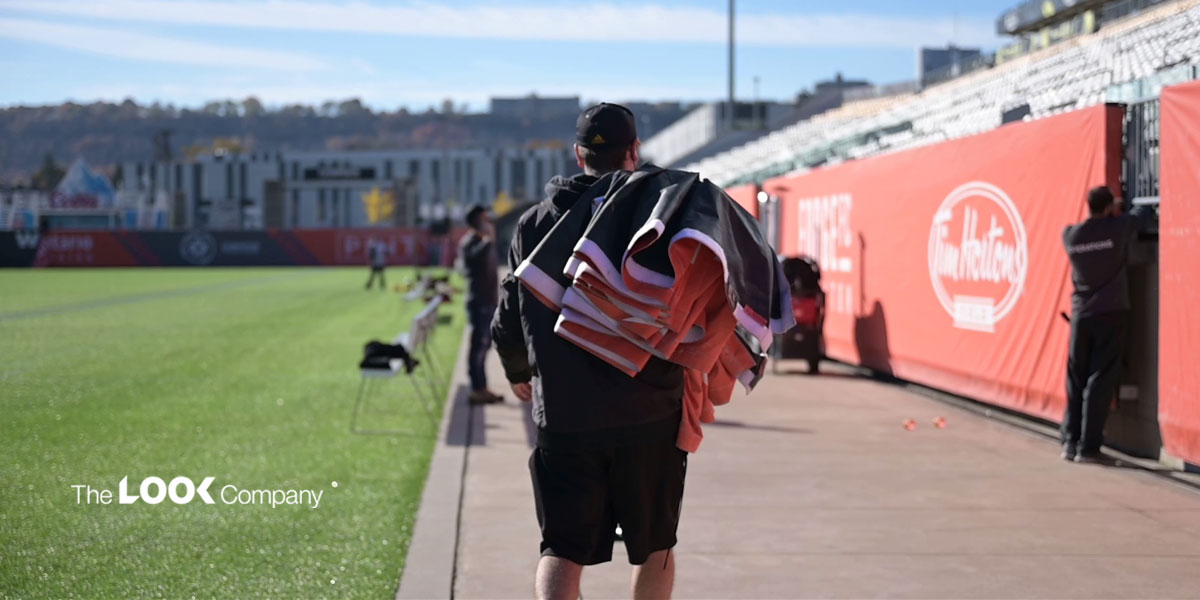 It’s game day. The lights are up, the players take the field and fans are ready to cheer on their team. Branded graphics outfit the field of play, vomitories, exterior signage, VIP and sponsored areas, as well as many interior fan and operations areas. The overall excitement in the stadium is overwhelming as the roar of the crowd surges with anticipation.

A team’s identity on the field is an embodiment of the players and the team culture. It’s intended to epitomize winning, grit, and determination. It’s a visual connection that brings people together to celebrate impossible wins or allows them to reminisce about heart-breaking losses. With bold stadium graphics, sports teams can connect visually with the fans to ingrain memorable experiences. It’s all a part of the live game. And as fans, we love it.

A lot of effort goes into maintaining the look and feel of a stadium to heighten the fan experience. Rebranding, updating the visual identity of the team, or a change in sponsorship will drive the need to present new images throughout a venue. New graphics help to invigorate support for the team and drive ticket and merchandise sales. But what happens when the stands are silent in the off-season? Are there opportunities to repurpose the venue for other tournaments, sports teams, or events?

Multi-purpose Stadiums in the USA

What if every day could be game day? Multi-purpose stadiums are not a new concept, with the majority of these types of venues being built in the U.S. primarily during the 1960s and 1970s to accommodate the two most common and popular sports - American football and baseball.

Unfortunately, even though the intention was to lower or offset operational costs, the size and shape of the fields were vastly different, one being a diamond (baseball) and the other a long rectangle (football). Often seating areas would have to be added or taken away to change the shape of the field. The laborious changeovers led to the phasing out of multi-purpose stadiums for professional football and baseball by the 1990s.

Although there was a phase-out of multi-purpose stadiums designed to house the MLB and NFL, there was still interest in using a single-use venue for other types of events. Conferences, concerts, or even NCAA competitions such as the Final Four found themselves at a stadium where the primary team is football. The need to utilize the high-capacity facilities drove modern stadium designs to include architectural features such as retractable or domed roofs, or transformational pitches to accommodate community activities and large events year-round.

In Canada, multi-use stadiums remain commonplace. Not just for baseball and football, but other sports, teams, competitions, tournaments, and events. The Rogers Center (SkyDome), which opened in 1989, is the first sports facility to have a fully retractable motorized roof. Historically it has been used for soccer, basketball, the Canadian Football League, and the National Football League, even though nowadays it’s just the primary home field for the Toronto Bluejays baseball team.

BC Place in Vancouver opened in 1983 with the world’s largest air-supported dome. It was retrofitted with a retractable roof in 2010, and remains the home turf to the CFL’s BC Lions, Vancouver Whitecaps FC (MLS), the annual Canada Sevens tournament (Rugby), the 2010 Winter Olympics as well as the championship game of the 2015 FIFA Women’s World Cup.

Several of the CFL stadiums are often used for alternative sporting events. Mosaic Stadium in Regina is an open-air outdoor stadium that has been transformed into the NHL Heritage Classic in 2019. Additionally, other outdoor venues in Canada are host to the NHL Outdoor Games such as the NHL 100 Classic, and the Centennial Classic. In these cases, the stadium bowls of the venue were outfitted with specialty graphics outside of their main team branding.

Most recently in 2021, the Commonwealth Stadium in Edmonton was repurposed for a FIFA World Cup qualifying match between Canada and the Mexican national soccer team.

Because the most popular sports in Canada are hockey and Canadian football, there are two main types of sports venues, indoor and open-air or outdoor. Outdoor venues across Canada have been versatile in adapting to other teams or specialty tournaments. For example, with the implementation of the Canadian Premier League (soccer) in 2019, some outdoor venues were modified to be able to coordinate a second branded team until the new soccer teams could build their own stadiums.

At Tim Hortons Field in Hamilton, the stadium was challenged with running two professional sports teams during the same season. As a result, The Look Company created a system to change out the graphics of the stadium to efficiently switch from football to soccer.

Watch how Tim Hortons Field transforms their stadium branding from black and gold for the TiCats to orange and grey for Forge FC:

Using custom polywoven with blockout fabric prints, the solution utilized the existing extrusions on the field of play. Fabric prints are installed over the existing graphics and zip-tied off for Forge FC games and then removed and stored on transportable rollers. Because the multi-use stadium capacity is 28,218 for TiCats games, custom printed mesh seat covers were created for specific sections of the stadium for a more intimate home game setting for the Forge FC.

For colleges and universities looking to utilize their fields for other purposes, a multi-use stadium approach is ideal, especially for NCAA Division II and III schools. Both the construction and maintenance of a large stadium that sits empty 85% of the year, doesn’t make much budgetary sense. Multi-purpose stadiums contribute an integral source of revenue throughout the year to help offset operational costs whether for sports, leisure or entertainment.

Consider these alternative uses for a stadium:

Integrating public use helps to bridge the gap between higher-education and their communities. Building amenities such as leasable rooms, concourses, or offices along with the built-in services for large crowds makes these spaces desirable for event organizers.

Graphic Changeovers for Stadiums from The Look Company

The Look Company provides solutions for large stadiums to adapt their branding for events, competitions or teams. With systems to easily change over graphics or to dress the exterior with temporary graphic structures, flags or fence scrim, enhance the fan experience for all attendees.

As an award-winning print partner, we have produced graphics and visual engagement solutions for stadiums in the Canadian Football League, Canadian Premier League, and U Sports. We have worked on large-scale projects including the 2010 Olympics, the FIFA Women's World Cup, the Pan Am Games, World Cup of Hockey, Major League Baseball events, National Hockey League Outdoor Games, the Canada Games, G7 Summit, Calgary Stampede and several other global sports events. Flip through our Sports Lookbook for a rundown on our visual engagement solutions for sports.

The Look Company offers innovative visual engagement solutions to bring your brand into prime focus at live sports arenas. Get in touch with us today and turn those sports fans into your brand advocates!