The Look Company Wins Gold, Bronze and Best in Show at FESPA Awards 2020

The Look Company is thrilled to announce that for the fifth year in a row we won Gold and a Best-In-Show Digital Awards and at FESPA Awards 2020. 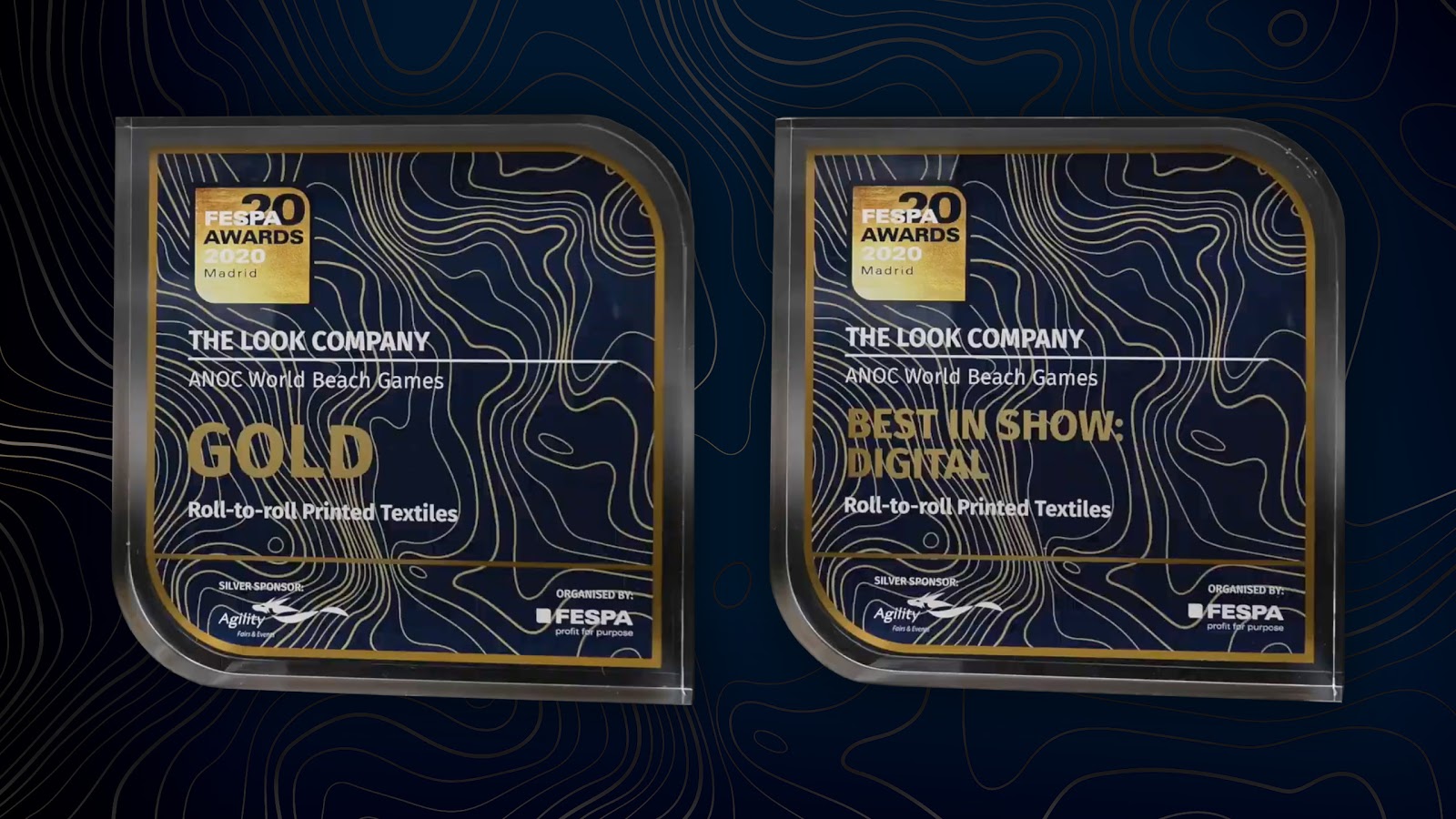 The Look Company is excited and honored to have won for the fifth year in a row at FESPA Awards 2020. The Look Company Middle East received Gold and Best-In-Show Digital Awards ANOC World Beach Games Qatar 2019. The Look Company North America took home a Bronze Award for Walmart Canada Displays.Â

FESPA received entries from 27 countries across the 18 categories. The winners were announced during an online ceremony in lieu of the live Gala awards event which would have taken place during this yearâs Global Print Expo in Madrid.

In accepting the awards for ANOC World Beach Games Qatar 2019, Jacob Burke, President, The Look Company Middle East stated, "we would like to thank our employees who consistently maintain our high print standards. Our team's work over the past five years has earned ten FESPA awards including two Best-In-Show Gold Medals".

"Another expansive project completed by the global expert in event branding."

As Official Look Partner for the ANOC World Beach Games Qatar 2019, this event branding project for the Association of National Olympic Committees (ANOC) combined over 28,600 square meters of branding elements.Â  It covered 34, 15 meter tall light towers and a vast mix of perimeter advertising, hoarding and event signage built around a total of 213 AutoCAD drawings. The fabric graphics on this project were direct printed and dye sublimated with proprietary fabric coatings to achieve the vibrant final output. Additionally, 110 buses were branded and over 300 square meters of flag fabric were printed and installed across the city. Thank you to the Qatar Olympic Committee for trusting us to execute your vision.

This store branding project for Walmart Canada involved the production of over 850 stretch fabric frames. Utilizing our modular extrusion system, we were able to configure custom display elements such as self check-out areas. The printed fabric graphics were finished with a rubber perimeter so that they could be easily inserted into the frame display structure. Thank you Walmart Canada for this opportunity.

Gerry Price, CEO & President The Look Company North America accepted the award for Walmart Canada Displays. âSuch opportunities to push the limits of what is possible in fabric printing would not be possible without the fantastic projects our clients provide us and the confidence they have in our ability to take on large, technically challenging jobsâ stated Gerry Price.

âWe would like to thank our trusted partners for your continued support. We look forward to pushing beyond the norm with our clients in the futureâ, Sebastien Garcin, Managing Director, The Look Company Europe.

Celebrating print excellence, the FESPA Awards is the only independent print industry awards recognizing not only the best print globally, but also the people responsible for its creativity and production. Each year, the talents of outstanding recipients are showcased and judged by industry experts. It is where industry standards are set and it is also where inspiration abounds.

About The Look Company

The Look Company is an international visual engagement company, producing display systems and printed graphics for both retail and sport environments.Â  As an award winning print partner we produce industry leading graphics and display systems for trusted brands such as Samsung, Under Armour, EsteÃ© Lauder, Skechers and Walmart. In addition, our products fill multiple sport stadiums as the provider of branding at The Olympics, Major League Baseball events, National Hockey League games, and several other diverse world championships.